Tiny traveling carnival, not seen for 35 years, comes to Wilmington

Small things come in very large packages. Or at least that’s what happened when a big, wooden shipping crate arrived at Thalian Hall a few days before Hurricane Florence struck Wilmington in September.

Within that crate was a whimsical world that hadn’t seen the light of day in more than 35 years: Adrian Vickers’ Miniature British Fair, a replica of a turn-of-the-century traveling carnival complete with a Ferris wheel, carousel, “Noah’s Ark” and much more. When fully assembled, the models, and the little dolls who fit in them, take up about 800 square feet.

After last touring the United States during the Bicentennial in 1976, the tiny fair will go back on display Dec. 17-20 at Thalian Hall as part of the historic venue’s Christmas Festival. The setup will be laid out in the upstairs ballroom, available to see for $5 a pop, or free to those who purchase tickets to one of four Christmas Festival events: screenings of of “Elf” and “Gremlins” on Dec. 17-18, a concert by singing trio The 3 Redneck Tenors on Dec. 19 and a screening of Christmas classic “It’s a Wonderful Life” on Dec. 20.

The fair belonged to Wilmington resident Adrian Vickers, who passed away this summer. An Englishman who immigrated to America late last century — he owned Factory Tile & Marble Outlet on Oleander Drive, where the set had been in storage — he’d been in informal talks with Thalian Hall executive director Tony Rivenbark to display the fair at some point, but the details never got worked out. 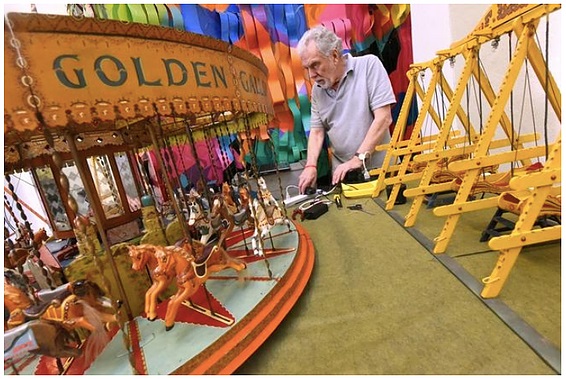 After Vickers died, his widow, Janice Vickers, and his daughter, Samantha Stevens, asked each other, “What are we going to do with the fair?” And so it wound up at Thalian Hall, where on Dec. 4 Janice Vickers laid eyes on some of the assembled models for the first time.

“Oh my goodness gracious. I’m totally amazed,” Vickers said. “He was always talking about taking it out and building it again.”

For one reason or another, once the set was shipped to Wilmington years ago, that never happened until now.

Vickers acquired the set more than 50 years ago, Janice Vickers said, partly by trading a car for it. In its heyday, the fair toured English model clubs and shopping centers, often used as an attraction, perhaps during the holidays. Janice Vickers said the set was most likely built over time, with some pieces possibly dating back to the 1920s or ’30s.

Putting the full set together took Adrian Vickers and an assistant three or four days. It’s taken Thalian Hall staff and volunteers considerably longer than that just to get the set partially assembled, but then again they’d never put it together before. There aren’t any instructions, either, just boxes and boxes of unlabeled parts, although some old pictures and a British TV segment recorded on video helped.

Much of the work has been done by Eric Robinson, an actor and affable English native who lives in Wilmington.

“Eric is a just a whiz at making strange stuff work,” Rivenbark said.

Along with help from Thalian Hall staffers Randy Davis, Cole Marquis and others, and with volunteers helping clean pieces that’d been gathering dust for three decades, assembly began in November. Just like in real life, the models can be broken down and packed into brightly decorated, boxcar-like transports.

“It’s been fun,” said Robinson, who as a youngster attended real fairs like the ones the miniature version is based on. Some were traveling carnivals, while others were permanently situated in seaside towns where working families would come for holiday.“I saw them as a child,” Robinson said, and “in a way,” assembling the set has been like revisiting his childhood.

The process of assembling the fair began in fits and starts, and “we were led down the garden path a few times,” Robinson said. But as he’s gotten more familiar, the work has progressed more quickly, although he still hasn’t tackled “The Waltzer,” a kind of early spinning ride.

The whole thing is electrically powered. The Ferris wheel and carousel are both adorned with lights, and they both spin. They were powered by a somewhat clunky and antiquated circuit board outfitted with cables of the kind that are no longer made, so Robinson has had to bring modern-day electronics into the picture, which has provided a few hiccups. He’s also fashioned a soundtrack for the fair: music from Reginald Dixon, the wildly popular British organist of old.The set is in good shape considering that “it’s been in a box for 30 years,” Robinson said. “It’s not in pristine condition, but it has what they call provenance. You wouldn’t want it to be bright and sparking.

Somewhat fittingly, the set is continuing to fulfill its original function as an attraction to draw crowds, in this case to Thalian Hall.Where it goes from here is anyone’s guess, but Robinson said he’d love to see Vickers’ Miniature British Fair go on permanent display somewhere, ideally in Wilmington.

“The more you take it apart and put it back together, the more you damage it,” he said. “Some tender, loving care is what it needs.”Janice Vickers said she’d like to see the fair find a home as well.

For now, however, she’s going to enjoy looking at it after hearing about it for more than three decades.“It gives me a big smile to see it after all these years,” she said, adding that she’s sure her husband, “would be delighted.”

It would be great if we all loved our children’s spouses. But what happens if we don’t? And worse, END_OF_DOCUMENT_TOKEN_TO_BE_REPLACED

Advance Directives are legal documents that protect you when you are unable to relay the information yourself. This may be due END_OF_DOCUMENT_TOKEN_TO_BE_REPLACED