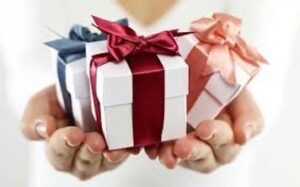 Whether it is the holidays or not, gifting away money or “things” is very often something that people start doing after retirement. That being said, giving gifts can cause problems in ways we don’t realize, especially when someone needs care at home, assisted living or nursing home care. To start. one of the things we hear most often from people is: “Should we just take all the money out of mom’s name and put it in our name so we can protect the money in case she needs Medicaid? I know someone who did it and they said it was fine!” The answer to this question is, simply, NO. Here’s why: To meet the asset eligibility requirements to qualify for Medicaid assistance for nursing home care or for PACE (Program of All-Inclusive Care for the Elderly), many people need to dispose of their assets until their “countable assets” are not more than the allowable amount. “Gifts” Can, And Will, Be Penalized

This disposal of assets is sometimes accomplished by making “divestments” – what we might consider, normally, to be gifts. When gifts are given under certain circumstances, a penalty for giving that gift results, and the person whose money was given will be ineligible for Medicaid benefits for a certain amount of time. The Problem? The Rules Are Complicated, And Don’t Make Sense – It Is So Easy To Make A Mistake Here are some examples of gifting that may/will result in a penalty: Note: these are penalty situations when you apply for benefits as described above within 60 months of doing one of these things, as described below. This list is only a few examples, and does NOT cover everything– Well-meaning mom gives her well-deserving daughter a credit card. Well-deserving daughter makes purchases for incidentals, some high dollar, for mom, for herself, for the family and in the course of a year racks up $23,000 dollars in credit card charges. Mom suffers an unexpected stroke while playing bridge with the girls and needs long term care in a nursing home. Family applies for Medicaid on mom’s behalf. Mom is assessed a 3 ½ month penalty in which she must pay out of pocket the monthly $6600 room and board until Medicaid will begin paying.

Husband and Wife decide to make a gift of $63,000 dollars in cash, all the money they have saved all their lives after saving enough to buy a home, to their son and daughter-in-law so Medicaid will help pay husband’s $6600 per month nursing home bill. Not only did Medicaid impose a penalty of 10 months in which the family was responsible for paying the nursing home, but son was unable to “cure” the gift by giving the money back to his parents; the balance of what was left after son and daughter-in-law’s spending spree was subject to equitable distribution in their divorce. A widowed father gives his high-powered executive son $175,000.00 present day dollars’ worth of securities in December of 2011 as part of what he thought to be a great plan. He anticipates he will make the gift, wait out the 5 year “lookback period” he’s heard about, and then when, or if, he ever needs to go into a home at any time after December of 2016, Medicaid will pay the exorbitant cost of his monthly nursing home care without even inquiring into the large gift made over 5 years earlier. We make plans, and God laughs. High powered executive son not only lost any capital gains tax benefits associated with the asset the day his father transferred the stock into son’s name, but son dies unexpectedly and suddenly from a heart attack, and the $175,000.00 becomes part of son’s estate to pay creditors and expenses. In July of 2010, Father falls down a slippery flight of stairs at the beach house during a rainstorm, breaking his hip. Complications from his rehab stay at a rehabilitation facility lands him in a skilled nursing facility for the long term. When father’s sister, the only surviving family member, applies for Medicaid to pay the monthly cost of nursing home care, the $175,000 gift results in a penalty of over 27 months where Medicaid will not pay the nursing home.

What You Don’t Know Can Hurt You And Your Family…. For every $6300 dollars gifted, Medicaid will withhold paying for 1 months’ worth of care Outright gifting during your lifetime means losing significant tax benefits. When you gift outright to your children, family members, or friends, you and the money you gave them, become vulnerable to their set of circumstances. You could lose your money to their divorce judgments, creditors, lawsuit judgments, death, bad spending habits, or just poor judgment.

It would be great if we all loved our children’s spouses. But what happens if we don’t? And worse, END_OF_DOCUMENT_TOKEN_TO_BE_REPLACED

Advance Directives are legal documents that protect you when you are unable to relay the information yourself. This may be due END_OF_DOCUMENT_TOKEN_TO_BE_REPLACED