A long-term care institute is asking long-term care professionals to send in examples of “no brainer” regulations or practices that should be changed or eradicated for the betterment of resident care and the nation’s care-delivery system.

Submissions will be discussed and molded at an invitation-only summit November 30 in Philadelphia by top national stakeholders. That group will include representatives from the federal government, managed care, insurers, provider associations and more, said John Whitman, the executive director of The TRECS Institute, who is leading the effort.

“Almost anybody who works in the field has their own list of what they consider ‘no brainers,’” said Whitman, a licensed nursing home administrator and a faculty member at The Wharton School’s MBA Health and Management Program.

“These are things they shouldn’t be doing, but they have to. We need their help. It’s a grassroots effort, from people who see it and experience it in the field every day.”

The goal is to get regulators and third-party payers to streamline changes as quickly as possible.

One example of a “no brainer” is how Medicaid long-term care residents have to be transferred to the hospital for blood transfusions, Whitman said. That costs the system about $15,000 and exposes a senior to germs floating around a hospital, while simpler Medicare-sponsored transfusions can be administered bedside at a skilled nursing facility for less than $2,500. 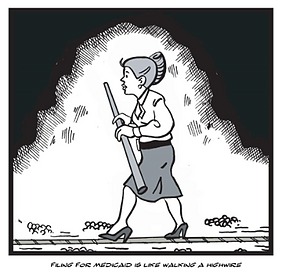 “When Medicaid was passed in 1965, the only safe place to do transfusions was in a hospital,” he noted. “Medicare has changed its regulations since then but Medicaid hasn’t.”

Another “no brainer” that should be changed is the requirement to give patients in their last days of life 1,500 calories per day via tube feedings, Whitman added.

“Doctors ask why they’re doing it, and it extends life maybe a day or two, but at no value, and it costs the system a lot,” he said.

Professionals at the Pennsylvania University school of nursing will verify the regulations exist for the “No Brainer” submissions received. Then, researchers with the Leonard Davis Institute of Health Economics at Penn will calculate potential costs and savings. That should produce about two-dozen points of discussion for the movers-and-shakers at the one-day summit.

“I can’t help but think if we get third-party risk-takers such as insurers, managed care, accountable care organizations and others in the room, they’re going to ask themselves why they aren’t doing transfusions bedside, and the other ideas that make sense,” Whitman said.

Getting the government to expedite its Medicare or Medicaid processes might be a little harder, but managed care companies can do it right away, he added.

It would be great if we all loved our children’s spouses. But what happens if we don’t? And worse, END_OF_DOCUMENT_TOKEN_TO_BE_REPLACED

Advance Directives are legal documents that protect you when you are unable to relay the information yourself. This may be due END_OF_DOCUMENT_TOKEN_TO_BE_REPLACED